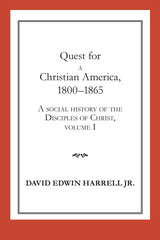 The definitive social history of the Disciples of Christ in the 19th century.

The Disciples of Christ, led by reformers such as Alexander Campbell and Barton W. Stone, was one of a number of early-19th-century primitivist religious movements seeking to "restore the ancient order of things." The Disciples movement was little more than a loose collection of independent congregations until the middle of the 19th century, but by 1900 three clear groupings of churches had appeared. Today, more than 5 million Americans—members
of the modern-day Disciples of Christ (Christian Church), Independent Christian Churches, and Churches of Christ, among others—trace their religious heritage to this "Restoration Movement."

David Edwin Harrell is Breeden Eminent Scholar in the Humanities at Auburn University and the author of six books on American religious history.