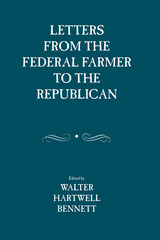 The Federal Farmer’s letters were written in opposition to the Constitution in the form in which it had come from the Federal Convention of 1787. Their immediate objective was to secure amendments to the Constitution before it was ratified by state convention. But the letters are valuable also for the basic political philosophy that they represent, specifically, the political philosophy of the revolution and the Bill of Rights. This philosophy stresses principles of federalism and republicanism and exemplifies the liberal idealism that took root in America during the Revolutionary War era.

As first published, the letters comprised two separate pamphlets, one appearing in the fall of 1787 and consisting of five letters, the other appearing in the spring of 1788 and consisting of thirteen letters. The letters have seldom been reprinted, and until now they have never been issued together in a single edition. One of the merits of the present volume is that it includes all the letters exactly as they appeared in the original printed texts. A synoptic table of contents for the entire series has been supplied by the editor, in addition to an editor’s introduction, which includes a critical analysis of the Federal Farmer’s main arguments and also deals with the authorship of the letters.

Richard Henry Lee of Virginia was early identified as the author of the letters, and in the course of the nineteenth century this attribution came to be generally accepted. However, Lee gave no hint in his known writings that he had written the letters, and in recent years the attribution of authorship to him has been questioned by competent scholars. The editor makes clear that he considers the evidence supporting the attribution to Lee to be strong, but he concludes, on the basis of his own investigation, that the question of authorship should not at this point be considered to have been settled. He makes no assumption that the matter will eventually be settled but suggests that a thoroughgoing linguistic and comparative analysis of Lee’s known writings and the Federal Farmer’s letters should be helpful in considering the question further.

The letters have long been considered to be among the most significant of the political literature published in America during the great debate over the ratification of the Constitution. Alexander Hamilton refers to the Federal Farmer in the sixty-eight essay of The Federalist as “the most plausible” of the opponents of the Constitution to have appeared in print. Recent scholars probing into the literature of these so-called antifederalists have indicated that they have been quite impressed by the general content and comparatively moderate tone of the Federal Farmer’s letters, and also by the seemingly substantial influence that the letters had in articulating arguments that appeared sooner or later in other writings against ratifying the Constitution in it original form.
AUTHOR BIOGRAPHY