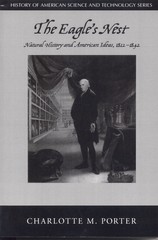 "Charlotte Porter offers vivid details on the physical and professional trials of field naturalists, handicapped by lack of access to libraries and collections and held in deep disdain by the eastern savants, who more and more scorned their publications, rejected their species-splitting taxonomy, excluded them from the review process, and relegated them to the status of hirelings. Porter draws a poignant picture of the treatment thus accorded Titian Peale and flawed genius Constantine Rafinesque."—Journal of American History

“When Benjamin Silliman, a 22-year-old lawyer completely unschooled in the sciences, was appointed to the first professorship of natural science at Yale University, he immediately set off for Philadelphia. To Silliman in 1802, Philadelphia ‘presented more advantage to science than any other place in our country.’ Soon thereafter William Maclure, ‘father’ of American geology and an early president of the Academy of Natural Sciences, became the dominant figure within Philadelphia's considerable population of naturalists. The Philadelphia circle justly serves as a focus for The Eagle's Nest: Natural History and American Ideas, 1812-1842, Charlotte M. Porter's study of early American forays into natural history.”—New York Times Review of Books