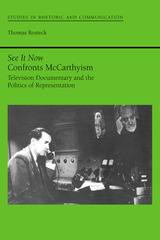 See It Now, Edward R. Murrow and Fred W. Friendly’s early documentary television program, has come to be recognized as the exemplar of nonfiction television. One important element in its reputation is a series of four telecasts directly dealing with abuses of McCarthyism and the Red Scare. This book is about those programs, but it is also about the early 1950s in America, the troubled era in which these programs were broadcast. This book is, then, both cul­tural history and media analysis.

As media analysis, this book seeks to understand the symbolic form, the aesthetic construction, and the subsequent experience that these four programs offered viewers. This sort of critical analy­sis is a development of recent vintage in American media studies. Whereas a decade ago television and the media were studied largely through an empiricist social scientific paradigm, now humanistic approaches to media discourses engage the interest of scholars in history, rhetoric and communication, political science, anthropology, and American studies. As case study, then, this book bridges classical humanist and contemporary mass media approaches, and as we go, I shall essay the utility of humanistic methods for the understanding and explication of mass media that is primarily visual in nature.

As cultural history, this book seeks to illuminate a unique era in the recent American past. My aim is to understand the programs as articulations of public “common sense” and as artifacts that help convey this common sense. Thus, a second theme of this book will be to locate-through the analysis of public discourse cast in the television documentary form—an American ideology: a set of “templates” that both ground the programs and reveal the cultural assumptions of the historical period.

In addition, from a slightly different historical perspective, our increased understanding of these See It Now broadcasts gives us an appreciation of the development of the television industry and the genre of television documentary. Coming at a time when few Americans had television sets, these See It Now programs coincided with an exponential increase in television ownership and popularity. As an elaborate defense of free speech for the medium, these documentaries may have helped to establish autonomy and a direction for a nascent broadcasting industry. More specifically, as the paradigm for the television documentary and as the first regularly scheduled documentary series, these See It Now programs shaped expectations and set the benchmark to which all nonfiction television, from Twentieth Century to White Paper to Sixty Minutes, has been compared. Thus, a third theme will be the implications of these seminal programs for media institutions and for the genre of television news documentary.
AUTHOR BIOGRAPHY
Thomas Rosteck is associate professor of Communication at the University of Arkansas. He is editor of At the Intersection: Cultural Studies and Rhetorical Studies.

"Rostock's history offers penetrating insight into the extraordinary relationship between Cold War ideology, television documentary, the tactics of Senator Joseph R. McCarthy, and their overall impact on political culture. . . . A notable, scholarly contribution to the understanding of this period."--Choice

"Readers who are drawn to [this book] for what it provides in the way of theoretical argument will also find themselves instructed on every page by its illuminating readings of the documentary texts, and impressed by the way Rosteck manages to sustain the balance between theory and criticism to the benefit of both."--Quarterly Journal of Speech

"A brilliantly detailed case study of the rhetoric of television documentary."--Newsletter of the Speech Communication Association