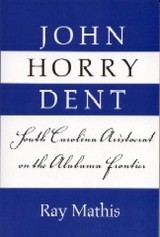 Explores the world of wealthy planter and landholder John Horry Dent . . . Who at one time owned five plantations in Barbour County, Alabama. In 1837, when he came to the newly opened [Creek Nation lands on the] Alabama frontier with his young wife and her 35 slaves, he had the building of an agrarian dynasty in mind, but his ambition was thwarted by the Civil War. . . . Taken from Dent's extensive journals, the book is minutely specific about every facet of life on a large plantation, in the fields and the slave cabins, the mansion and the business office.

A valuable microcosmic slice of Old South life that allows the testing of many of our large historical assumptions against individual experience.