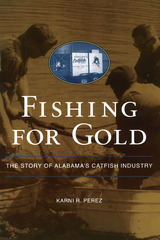 A captivating story of the industry's rise in Alabama.

With a wonderful ear for dialogue and in flowing narrative style, Karni Perez weaves together oral histories collected from early hatchery owners, catfish farmers, processors, and researchers to recount the important contributions made by Alabamians to the channel catfish industry. Perez describes the struggles and glories of fish culture from its early days as an experimental venture to the thriving present-day commercial enterprise that supplies warmwater fish for the American food industry.

As Perez states, "The catfish industry started out in Alabama as a do-it-yourself and figure-it out-yourself kind of enterprise." We hear how men who were mostly cattle farmers learned to nudge male and female fish into spawning in crudely constructed aquaria, how growers discovered the dissolved oxygen needs of their "herd" when big die-offs occurred, how Lenson Montz and Otis Breland designed the first paddle aerator to remedy the problem, how farmers eventually trained a bottomfeeding species to rise to the water surface to eat so their numbers could be better estimated. In one dramatic story, we learn how a man experimenting with the first skinning machine lost a piece of his hand in front of a crowd of horrified locals. (After it was retrieved from the skin basket, it was reattached by a town doctor and healed perfectly.) Ironically, the man was a representative of the engineering firm tasked with designing the machine; he had never before seen a catfish in his life. The machine was modified and became an essential component of modern fish processing.
In addition to telling the remarkable stories of individual contributions by farmers and researchers, Perez explains the positive effects played by improved public infrastructure, continued biological research, state legislation, and federal recognition of aquaculture as agriculture.
From Chapter Three:
"You're crazy," the bank officer declared with a friendly chuckle. "Why,
the Warrior River is full of catfish for anyone who wants them. There are
more in there than people will ever eat. And you think you're going to go
sell them when folks can go get them for nothing? That's just a bunch of
dreams!"
From Chapter Two:
“A crop duster's error, a visit by a curious feed company researcher, a
fluke of the weather, a coincidental encounter at a gas station. . . . How
could the three men, or anyone else for that matter, guess that these
chance circumstances would play into the birth of an industry that would
mushroom over the next forty or so years into one of the largest
contributors to the state's economy and that of the entire southeastern
United States?”
AUTHOR BIOGRAPHY
Karni Perez is an independent researcher who resides in Auburn, Alabama.
TABLE OF CONTENTS