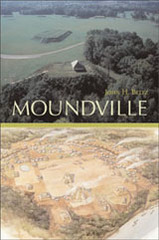 Inaugural pocket guide from our new series of illustrated guidebooks

In the 13th century, Moundville was one of the largest Native American settlements north of Mexico. Spread over 325 acres were 29 earthen mounds arranged around a great plaza, a mile-long stockade, and dozens of dwellings for thousands of people. Moundville, in size and complexity second only to the Cahokia site in Illinois, was a heavily populated town, as well as a political and religious center.

Moundville was sustained by tribute of food and labor provided by the people who lived in the nearby floodplain as well as other smaller mound centers. The immediate area appears to have been thickly populated, but by about A.D. 1350, Moundville retained only ceremonial and political functions. A decline ensued, and by the 1500s the area was abandoned. By the time the first Europeans reached the Southeast in the 1540s, the precise links between Moundville's inhabitants and what became the historic Native American tribes had become a mystery.

Illustrated with 50 color photos, maps, and figures, Moundville tells the story of the ancient people who lived there, the modern struggle to save the site from destruction, and the scientific saga of the archaeologists who brought the story to life. Moundville is the book to read before, during, or after a visit to Alabama’s prehistoric metropolis.

John H. Blitz is an anthropological archaeologist at The University of Alabama and currently directs the Early Moundville Archaeological Project at the prehistoric site of Moundville, Alabama.