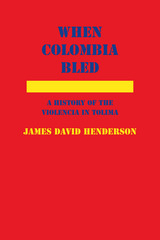 This book focuses on the Colombian Violencia, the undeclared civil war between the Liberal and Conservative parties that raged from the late 1940s to early 1960s. It presents the information as a narrative history.

There is also an array of appendixes, maps, and photographs.

“In the abundant literature concerning the Colombian Violencia, that undeclared civil war between the Liberal and Conservative parties that raged from the late 1940s to early 1960s, Henderson’s book must take its place as one of the best studies yet produced. It is solidly researched and well-written. It is also distinctive in methodological approach and regional focus and much of its interpretation… the book is an organizational tour de force.

“Henderson uses the techniques of narrative history to present his data, rather than social scientific analysis. This method is well suited to recreating the local flavor of events and certainly adds to the book’s readability.

“Henderson must receive credit for a remarkably objective treatment of Colombian political forces [and] this is just one more of the ways in which the author has shown a refreshing originality.” – Locus

”This perceptive analysis of la Violencia, brilliantly written and conscientiously researched, is the best that has come to the attention of this reviewer.” – Latin America in Books

“Gracefully written, Henderson’s narrative is compelling in its account of political conflict over a century and a half in one department. His fresh perspective can serve to amplify and qualify our knowledge of Colombia’s tragedy.” – The Americas