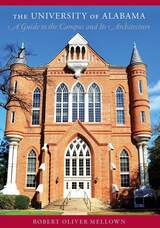 Over twenty years later, this new guide brings to light the numerous additions, expansions, and renovations the university has undergone on its spacious grounds in Tuscaloosa. In addition to updated sections devoted to the university’s historic landmarks—such as Foster Auditorium, where “the stand in the schoolhouse door” occurred; Denny Chimes,where the handprints and footprints of famous Tide athletes are memorialized in concrete; and the Gorgas House, which with stood the destruction of Union troops at the end of the Civil War—new sections account for the acquisition of Bryce Hospital’s campus, the expansions at Bryant-Denny Stadium to accommodate the growing Crimson Tide fan base, and the burgeoning student recreation facilities, playing fields, and residential communities.

Chapters are arranged into various campus tours for walking or driving—Antebellum, Victorian, Early Twentieth-Century, East Quad, West Quad, Science and Engineering Corridor, Student Life, Bryce, Medical, Southeast, Athletics, and Off Campus. Alumni, prospective students and their parents, new faculty, out-of-state visitors, and foreign dignitaries will all welcome this useful, compact, and colorful guide to one of the most beautiful campuses in the country.
AUTHOR BIOGRAPHY
Robert Oliver Mellown is associate professor of art history emeritus at the University of Alabama and author of The University of Alabama: A Guide to the Campus.
TABLE OF CONTENTS