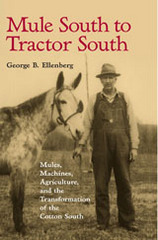 The author describes the adoption of the mule as the major agricultural resource in the American South and its later displacement by the mechanical tractor. After describing the surprising slowness of southern farmers to realize the superiority of the mule over the horse for agricultural labor, Ellenberg strives to capture the symbiosis that emerged between animal and man to illuminate why and how the mule became a standard feature in Southern folk culture.

Having been slow to adopt the mule, southern farmers were then reluctant to set it aside in favor of the tractor. Ellenberg describes the transformation as the tractor gradually displaced the mule and the role of the U.S. Department of Agriculture in this process.

The work not only becomes a survey of the development of southern agriculture as revealed through an examination of this premier work animal but also follows the emergence of the animal as a cultural icon, as it figures in southern literature, folklore, and music.
AUTHOR BIOGRAPHY
George B. Ellenberg is Associate Dean of Arts and Sciences and Associate Professor of History at the University of West Florida.
TABLE OF CONTENTS