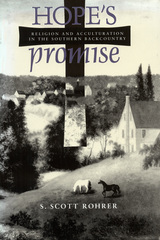 This eloquent study describes the complex process of assimilation that occurred among multi-ethnic groups in Wachovia, the evangelical community that settled a 100,000-acre tract in Piedmont North Carolina from 1750 to 1860. It counters commonplace notions that evangelicalism was a divisive force in the antebellum South, demonstrating instead the ability of evangelical beliefs and practices to unify diverse peoples and foster shared cultural values.

In Hope's Promise, Scott Rohrer dissects the internal workings of the ecumenical Moravian movement at Wachovia—how this disparate group of pilgrims hailing from many countries (Germany, Ireland, Scandinavia, England) and different denominations (Lutheran, Reformed, Methodist, Anglican) yielded their ethnicities as they became, above all, a people of faith. By examining the "open" farm congregations of Hope, Friedberg, and Friedland, Rohrer offers a sensitive portrayal of their evangelical life and the momentous cultural changes it wrought: the organization of tight-knit congregations bound by "heart religion;" the theology of the new birth; the shape of religious discipline; the sacrament of communion; and the role of music. Drawing on courthouse documents and church records, Rohrer carefully demonstrates how various groups began to take on traits of the others. He also illustrates how evangelical values propelled interaction with the outside world—at the meetinghouse and the frontier store, for example—and fostered even more collective and accelerated change.

As the Moravians became ever more "American" and "southern," the polyglot of ethnicities that was Wachovia would, under the unifying banner of evangelicalism, meld into one of the most sophisticated religious communities in early America.
AUTHOR BIOGRAPHY
S. Scott Rohrer is an independent scholar and Senior Copy Editor for National Journal in Washington, D.C.
TABLE OF CONTENTS