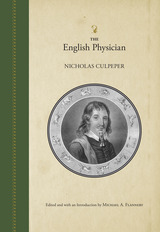 The first medical book published in the American colonies.

The English Physician is a humble vest-pocket-sized 94-page medical guide for the common person, by the prolific herbalist and author Nicholas Culpeper. It was a staple in 17th-century England, as it was short, written in accessible prose, and inexpensive; and perhaps as attractive, it took a decidedly skeptical view of "official" medicine, relying instead on popular remedies. Culpeper’s philosophy was to teach the common folk to minister to themselves by providing them with the tools and knowledge for self-help.

Published in Boston in 1708 by Nicholas Boone, the American version of The English Physician was widely cited and used at the time. Today only five copies are known to exist. The rarity of this vade mecum of colonial America is wrapped in mystery: Who really wrote this book and when, where, and how did it originate?

The editor illuminates these mysteries while adding an informative historical introduction on the state of medical knowledge and practice at the time, exploring Culpeper’s position among competing medical writers, and glossing the medical and botanical terms, providing contemporary equivalents. Modern readers will discover the meaning behind the strangely named brews and concoctions of the 17th century and will learn how this Boston printing literally transformed the American landscape with herbs brought from the British colonists’ homeland.

Michael A. Flannery is Associate Professor and Associate Director for Historical Collections at the Lister Hill Library of the Health Sciences, University of Alabama at Birmingham. A recipient of the Edward Kremers Award for outstanding scholarship in pharmaceutical history by an American, he is the author of five books, including America’s Botanico-Medical Movements: Vox Populi.