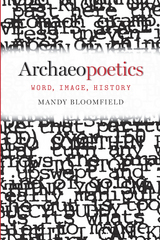 Archaeopoetics explores “archaeological poetry,” ground-breaking and experimental writing by innovative poets whose work opens up broad new avenues by which contemporary readers may approach the past, illuminating the dense web of interconnections often lost in traditional historiography.

Exploring our shared but imperfectly understood history as well as omissions and blind spots in historiography, Bloomfield outlines the tension between the irretrievability of effaced historical evidence and the hope that poetry may reconstitute such unrecoverable histories. She posits that this tension is fertile, engendering a form of aesthetically enacted epistemological enquiry.

Fascinating and seminal, Archaeopoetics pays special attention to the sensuous materiality of texts and most especially to the visual manifestations of poetry. The poems in this volume employ the visual imagery of the word itself or incorporate imagery into the poetry to propose persuasive alternatives to narrative or discursive frameworks of historical knowledge.
AUTHOR BIOGRAPHY
Mandy Bloomfield is lecturer in English at the University of Plymouth in the United Kingdom, where she teaches both critical theory and modern and contemporary literature.