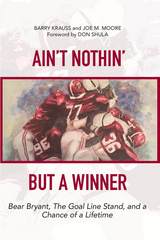 No university has won more football championships than Alabama, and Barry Krauss played a key role in one of them. The linebacker’s fourth down stop of Penn State’s Mike Guman in the Sugar Bowl on January 1, 1979, was recently named by ESPN as one of the ten most important plays of the 20th century.

The Goal Line Stand, as the play became known, immortalized Krauss among legions of fans. More than twenty-five years later, people still tell him exactly what they were doing and how they felt when he collided in mid-air with Guman that New Year’s Day—and almost never mention his twelve-year career in the NFL.

In this entertaining and well-illustrated memoir, Krauss tells of scrimmaging on front lawns with friends as a kid in Pompano Beach, Florida, and of his childhood dream to play for Don Shula. He acknowledges how Coach Bear Bryant tamed his free spirit and shaped him into the football player—and the man—he became. In addition, he emphasizes the importance of team, weaving together the personal stories of his Alabama teammates on the field during the Goal Line Stand, and acknowledges their significant roles in winning the game and the championship.

Ain’t Nothin’ But a Winner offers an insider’s look at how a team is built, tested, and becomes a national champion—and how that process sometimes calls upon an individual to rise to the challenge presented by his own personal gut check.
AUTHOR BIOGRAPHY
Barry Krauss was a key member of The University of Alabama’s 1978 National Championship Football Team. A first round draft choice in 1979, he played twelve years in the NFL with the Baltimore and Indianapolis Colts and Miami Dolphins. Today Krauss is a professional broadcaster and motivational speaker based in Carmel, Indiana.
Joe M. Moore was a freshman member of the 1975 Crimson Tide football team, alongside Barry Krauss. He is the founder of Moore Management Group, which provides management consulting, marketing, and intellectual property development services to businesses. His work for the last decade has focused on television properties, ranging from series to specials to news segments. Moore lives in Mobile, Alabama.
TABLE OF CONTENTS