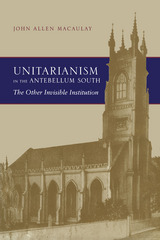 John Macaulay's model study of Unitarianism in the antebellum south reestablishes the denomination's position as an influential religious movement in the early history of the region. By looking at benevolent societies, lay meetings, professional and civic activity, ecumenical interchange, intellectual forums, business partnerships, literary correspondence, friendships, and other associations in which southern Unitarians were engaged with other southerners on a daily basis, Macaulay sees a much greater Unitarian presence than has been previously recognized. Instead of relying on a count of church steeples to gauge numbers, this volume blurs the lines between southern Unitarianism and orthodoxy by demonstrating how their theologies coexisted and intertwined.

Macaulay posits that just beneath the surface of organized religion in the South was an "invisible institution" not unlike Franklin Frazier's Black Church, a nebulous network of liberal faith that represented a sustained and continued strand of Enlightenment religious rationalism alongside and within an increasingly evangelical culture. He shows that there were in fact two invisible religious institutions in the antebellum South, one in the slave quarters and the other in the urban landscape of southern towns. Whereas slave preachers rediscovered in music and bodily movement and in themes of suffering a vibrant Christian community, Unitarians witnessed the simple spiritual truth that reason and belief are one unified whole.

In offering this fresh argument, Macaulay has chipped away at stereotypes of the mid-19th-century South as unreservedly "evangelical" and contributed greatly to historians' understanding of the diversity and complexity in southern religion.
AUTHOR BIOGRAPHY

John A. Macaulay is an independent scholar educated at Erskine College, Duke University Divinity School, and the University of South Carolina.