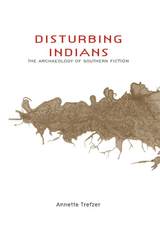 How Faulkner, Welty, Lytle, and Gordon reimagined and reconstructed the Native American past in their work.

In this book, Annette Trefzer argues that not only have Native Americans played an active role in the construction of the South’s cultural landscape—despite a history of colonization, dispossession, and removal aimed at rendering them invisible—but that their under-examined presence in southern literature also provides a crucial avenue for a post-regional understanding of the American South. William Faulkner, Eudora Welty, Andrew Lytle, and Caroline Gordon created works about the Spanish conquest of the New World, the Cherokee frontier during the Revolution, the expansion into the Mississippi Territory, and the slaveholding societies of the American southeast. They wrote 100 years after the forceful removal of Native Americans from the southeast but consistently returned to the idea of an "Indian frontier," each articulating a different vision and discourse about Native Americans—wholesome and pure in the vision of some, symptomatic of hybridity and universality for others.

Trefzer contends that these writers engage in a double discourse about the region and nation: fabricating regional identity by invoking the South’s "native" heritage and pointing to issues of national guilt, colonization, westward expansion, and imperialism in a period that saw the US sphere of influence widen dramatically. In both cases, the "Indian" signifies regional and national self-definitions and contributes to the shaping of cultural, racial, and national "others." Trefzer employs the idea of archeology in two senses: quite literally the excavation of artifacts in the South during the New Deal administration of the 1930s (a surfacing of material culture to which each writer responded) and archeology as a method for exploring texts she addresses (literary digs into the textual strata of America’s literature and its cultural history).

Annette Trefzer is an associate professor of English at the University of Mississippi.