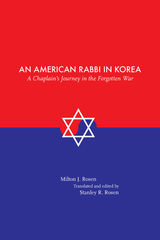 During the height of the Korean conflict, 1950–51, Orthodox Jewish chaplain Milton J. Rosen wrote 19 feature-length articles for Der Morgen Zhornal, a Yiddish daily in New York, documenting his wartime experiences as well as those of the servicemen under his care. Rosen was among those nearly caught in the Chinese entrapment of American and Allied forces in North Korea in late 1950, and some of his most poignant writing details the trying circumstances that faced both soldiers and civilians during that time.

As chaplain, Rosen was able to offer a unique account of the American Jewish experience on the frontlines and in the United States military while also describing the impact of the American presence on Korean citizens and their culture. His interest in Korean attitudes toward Jews is also a significant theme within these articles.
Stanley R. Rosen has translated his father’s articles into English and provides background on Milton Rosen’s military service before and after the Korean conflict. He presents an introductory overview of the war and includes helpful maps and photographs. The sum is a readable account of war and its turmoil from an astute and compassionate observer.
AUTHOR BIOGRAPHY
Milton J. Rosen, born in Lithuania in 1906, studied in Jerusalem and settled in Chicago where he was ordained rabbi in 1929. After 19 years as a practicing Orthodox rabbi, he was called up for military chaplaincy and served several tours of duty in Japan and Korea.

Stanley R. Rosen also served in Korea, as an information officer, and later became a physician practicing internal medicine in Illinois and Wisconsin.

"A haunting picture of Korea and the time of the Korean War, this is a short but fascinating book. It provides an unusual and, to my knowledge, unique perspective, with particular emphasis on the intriguing but little-studied subject of Jews and the U.S. military."--Barry Strauss, author of Fathers and Sons in Athens: Ideology and Society in the Era of the Peloponnesian War

"Chaplain Rosen's thoughts about his experience at the front in Korea reveal how little has changed in basic human life vis-à-vis warfare. You can feel the uncertainty, the fear, the physical discomfort, the military inanities, and the drama of civilians caught up in dislocation."--Richard M. Budd, author of Serving Two Masters: The Development of American Military Chaplaincy