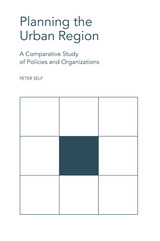 In tandem with an analysis of the basic purpose and rationale of urban planning, Peter Self discusses the achievements and failures of different types of planning authorities. Planning the Urban Region surveys in turn the planning of city governments, metro governments, and regional bodies as they attempt to guide the growth and character of large urban areas—within whose sprawl live roughly one-half of the populations of Western countries—with examples drawn from the United States, Great Britain, Canada, Australia, Sweden, and France.

Self argues that the urban region is at a political and organizational crossroads, as it must grapple with the problems of urban sprawl: the social effects of land use and housing, conflicts between local communities and the metro organizations, environmental issues, and the capacity of governmental systems to handle complex issues. Planning the Urban Region is a valuable contribution to the literature on the future of cities and urban regions and should materially inform the debate on the place of public planning in shaping that future.
AUTHOR BIOGRAPHY
Peter Self (1919–1999) was a journalist, town planner, and political scientist. He was also the author of several books, including Political Theories of Modern Government: Its Role and Reform, Government by the Market?: The Politics of Public Choice, and Rolling Back the Market: Economic Dogma and Political Choice.
TABLE OF CONTENTS


Preface
1. The Urban Region and Planning Theories
The Urban Region
The Goals of Urban Planning
The Meaning and Conditions of Planning
Powers and Organizations
2. Expanding and Declining Cities
Central Cities within the Urban Region
Expanding Cities and Regional Problems
Cities against Decline
The Appraisal of City Plans
3. Metro Government and Urban Planning
The Case for Metro Schemes
Metro Schemes in Action
Metros and Local Government Reform
Evaluation of Metro Planning
4. Central Government and Urban Regions
National Urban Policies
London and Paris: The Appeal and Limits of Ambitious Planning
Regional Planning in Federations
The Evaluation of Regional Planning Systems
5. The Planning of Urban Regions
Planning Aims and Horizons
The Working of Planning Systems
Methods of Positive Planning
Political and Organizational Choices
Notes
Bibliography
Index