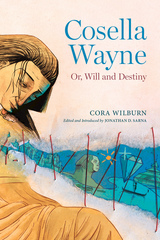 Published serially in the spiritualist journal Banner of Light in 1860, Cosella Wayne: Or, Will and Destiny is the first coming-of-age novel, written and published in English by an American Jewish woman, to depict Jews in the United States and transforms what we know about the history of early American Jewish literature. The novel never appeared in book form, went unmentioned in Jewish newspapers of the day, and studies of nineteenth-century American Jewish literature ignore it com­pletely. Yet the novel anticipates many central themes of American Jewish writing: intermar­riage, generational tension, family dysfunction, Jewish-Christian relations, immigration, poverty, the place of women in Jewish life, the nature of romantic love, and the tension between destiny and free will.

The narrative recounts a relationship be­tween an abusive Jewish father and the re­bellious daughter he molested as well as that daughter’s struggle to find a place in the com­plex social fabric of nineteenth-century Amer­ica. It is also unique in portraying such themes as an unmarried Jewish woman’s descent into poverty, her forlorn years as a starving or­phaned seamstress, her apostasy and return to Judaism, and her quest to be both Jewish and a spiritualist at one and the same time.

Jonathan Sarna, who introduces the volume, discovered Cosella Wayne while pursuing research at the Israel Institute for Advanced Studies in Jerusalem. This edition is supplemented with selections from Cora Wilburn’s recently rediscovered diary, which are reprinted in the appendix. Together, these materials help to situate Cosella Wayne within the life and times of one of nineteenth-century American Jewry’s least known and yet most prolific female authors.
AUTHOR BIOGRAPHY
Cora Wilburn (1824–1906), born Henrietta Pulfermacher, emigrated from France to the United States under the name Henretty Jackson in 1848. Her novels, essays, and poems mostly appeared in rare spiritualist journals and Jewish periodicals.

A Note on the Text

Cosella Wayne: Or, Will and Destiny

4. The Watcher by the Tomb

7. The Dawn of the New Life

12. Light on the Pathway

13. The Teachings of the Fathers

16. The Step into the World

21. Above the Clouds of Earth

22. The Realities of Life

24. The Mission of the Beautiful

28. The River of Death, and the Waters of Life