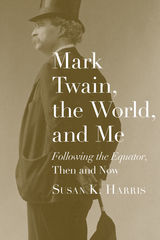 WINNER OF THE ELIZABETH AGEE PRIZE IN AMERICAN LITERATURE

A scholar accompanies Twain on his journey around the world

In Mark Twain, the World, and Me: “Following the Equator,” Then and Now, Susan K. Harris follows Twain’s last lecture tour as he wound his way through the British Empire in 1895–1896. Deftly blending history, biography, literary criticism, reportage, and travel memoir, Harris gives readers a unique take on one of America’s most widely studied writers.

Structured as a series of interlocking essays written in the first person, this engaging volume draws on Twain’s insights into the histories and cultures of Australia, India, and South Africa and weaves them into timely reflections on the legacies of those countries today. Harris offers meditations on what Twain’s travels mean for her as a scholar, a white woman, a Jewish American, a wife, and a mother. By treating topics as varied as colonial rule, the clash between indigenous and settler communities, racial and sexual “inbetweenness,” and species decimation, Harris reveals how the world we know grew out of the colonial world Twain encountered. Her essays explore issues of identity that still trouble us today: respecting race and gender, preserving nature, honoring indigenous peoples, and respecting religious differences.

AUTHOR BIOGRAPHY
Susan K. Harris is distinguished professor emerita at the University of Kansas. She is author of God’s Arbiters: Americans and the Philippines, 1898–1902; The Cultural Work of the Late Nineteenth Century Hostess: Annie Adams Fields and Mary Gladstone Drew; The Courtship of Olivia Langdon and Mark Twain; 19th-Century American Women’s Novels: Interpretive Strategies; and Mark Twain’s Escape from Time: A Study of Patterns and Images.
TABLE OF CONTENTS

Me, World, Twain: An Introduction

3. Money Matters, Or, Gifts for the Dead

4. Will the Real Savages Please Stand Up?