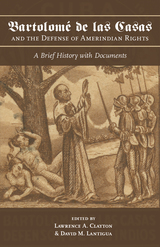 With the exception of Christopher Columbus, Bartolomé de las Casas is arguably the most notable figure of the Encounter Age. He is remembered principally as the creator of the Black Legend, as well as the protector of American Indians. He was one of the pioneers of the human rights movement, and a Christian activist who invoked law and Biblical scripture to challenge European colonialism in the great age of the Encounter. He was also one of the first and most thorough chroniclers of the conquest, and a biographer who saved the diary of Columbus’s first voyage for posterity by transcribing it in his History of the Indies before the diary was lost.

Bartolomé de las Casas and the Defense of Amerindian Rights: A Brief History with Documents provides the most wide-ranging and concise anthology of Las Casas’s writings, in translation, ever made available. It contains not only excerpts from his most well-known texts, but also his largely unavailable writings on political philosophy and law, and addresses the underappreciated aspects of his thought. Fifteen of the twenty-six documents are entirely new translations of Las Casas’s writings, a number of them appearing in English for the first time.

This volume focuses on his historical, political, and legal writings that address the deeply conflicted and violent sixteenth-century encounter between Europeans and indigenous peoples of the Americas. It also presents Las Casas as a more comprehensive and systematic philosophical and legal thinker than he is typically given credit for. The introduction by Lawrence A. Clayton and David M. Lantigua places these writings into a synthetic whole, tracing his advocacy for indigenous peoples throughout his career. By considering Las Casas’s ideas, actions, and even regrets in tandem, readers will understand the historical dynamics of Spanish imperialism more acutely within the social-political context of the times.
AUTHOR BIOGRAPHY
Lawrence A. Clayton is professor emeritus of history at the University of Alabama. He is author of Bartolomé de las Casas: A Biography and coauthor of A New History of Modern Latin America.

David M. Lantigua is assistant professor of moral theology and Christian ethics in the department of theology at the University of Notre Dame. He is coeditor of Comparative Religious Ethics: A Narrative Approach to Global Ethics.

III: Slavery and the New Laws

IV: The Theory and Practice of Peaceful Evangelization

Appendix B. Some Questions for Consideration