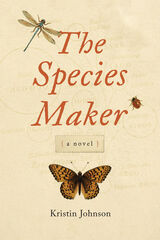 A historical novel about the role of science in modern life, set against the backdrop of the 1925 Scopes Trial

When William Jennings Bryan began a campaign to get evolution out of American schools in the 1920s, entomologist Martin Sullivan sought refuge from the tumult in his research. Although the theory of evolution provides the foundation for his scientific work, he prefers the careful methods of observation and classification to the passion of public debate. But when Martin takes a job teaching college biology in Seattle, he finds it increasingly difficult to retreat to the haven of science. His students are taking sides in the debate over whether religion and evolution can be reconciled. Socialists are using evolution to justify revolution. Politicians are citing Darwin in defense of anti-immigration laws. And Martin’s own colleagues are insisting that only eugenic reforms will save the world. As anti-evolution legislation spreads across the country and passions flare on all sides, the effort to apply science to marriage laws and mate choice even begins to touch the lives of those he loves. By the time the state of Tennessee puts John T. Scopes on trial for teaching evolution in the summer of 1925, Martin can no longer ignore the debates that surround him and must take a stand in the fight over the role of science in American society.

Although set a hundred years ago, The Species Maker wrestles with many issues that continue to confront scientists and science watchers in the present day. Kristin Johnson draws on her experiences in the classroom and extensive knowledge of the history of science to depict what it might have been like for a careful scientist to watch the heated debates over teaching evolution in the United States in the 1920s.

Visit www.thespeciesmaker.com for supplemental material including historical essays, links to online primary sources, a glossary, and guiding questions useful for the classroom or book clubs.