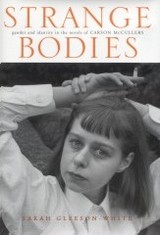 Adapts Mikhail Bakhtin's theory of the grotesque, as well as the latest in gender and psychoanalytic theory, to the major works of acclaimed southern writer Carson McCullers.

This innovative reconsideration of the themes of Carson McCullers's fiction argues that her work has heretofore suffered under the pall of narrow gothic interpretations, obscuring a more subversive agenda. By examining McCullers’s major novels—The Heart is a Lonely Hunter, Reflections in a Golden Eye, The Member of the Wedding, and The Ballad of the Sad Café—Gleeson-White locates a radical and specific form of the grotesque in the author's fiction: the liberating and redemptive possibilities of errant gender roles and shifting sexuality. She does this by employing Bakhtin's theory of the grotesque, which is both affirming and revolutionary, and thereby moves McCullers's texts beyond the 'gloom and doom' with which they have been charged for over fifty years.

The first chapter explores female adolescence by focusing on McCullers's tomboys in the context of oppressive southern womanhood. The second chapter analyzes McCullers's fascinating struggle to depict homosexual desire outside of traditional stereotypes. Gleeson-White then examines McCullers's portrayals of feminine and masculine gender through the tropes of cross-dressing, transvestism, and masquerade. The final chapter takes issue with earlier readings of androgyny in the texts to suggest a more useful concept McCullers herself called "the hybrid." Underpinning the whole study is the idea of a provocative, dynamic form of the grotesque that challenges traditional categories of normal and abnormal.

Because the characters and themes of McCullers's fiction were created in the 1940s and 1950s, a time of tension between the changing status of women and the southern ideal of womanhood, they are particularly fertile ground for a modern reexamination of this nature. Gleeson-White's study will be valued by scholars of American literature and gender and queer studies, by students of psychology, by academic libraries, and by readers of Carson McCullers. Strange Bodies is a thoughtful, highly credible analysis that adds dimension to the study of southern literature.


AUTHOR BIOGRAPHY
Sarah Gleeson-White is Senior Lecturer at the University of Sydney.
TABLE OF CONTENTS