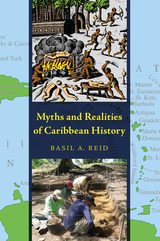 This book seeks to debunk eleven popular and prevalent myths about Caribbean history. Using archaeological evidence, it corrects many previous misconceptions promulgated by history books and oral tradition as they specifically relate to the pre-Colonial and European-contact periods. It informs popular audiences, as well as scholars, about the current state of archaeological/historical research in the Caribbean Basin and asserts the value of that research in fostering a better understanding of the region’s past.

Contrary to popular belief, the history of the Caribbean did not begin with the arrival of Europeans in 1492. It actually started 7,000 years ago with the infusion of Archaic groups from South America and the successive migrations of other peoples from Central America for about 2,000 years thereafter. In addition to discussing this rich cultural diversity of the Antillean past, Myths and Realities of Caribbean History debates the misuse of terms such as “Arawak” and “Ciboneys,” and the validity of Carib cannibalism allegations.
AUTHOR BIOGRAPHY
Basil A. Reid is author of Archaeology and Geoinformatics: Case Studies from the Caribbean and Lecturer in Archaeology at the University of the West Indies in St. Augustine, Trinidad and Tobago.
REVIEWS

“Myths and Realities of Caribbean History is well organized and well written. Arguments are easy to follow, and it includes a large number of references. Figures and tables are of good quality and appropriate. This book will be of interest to a wide variety of people in the entire Caribbean, tourists, Americans interested in the region, and various kinds of scholars that specialize in this area.”—L. Antonio Curet, Assistant Curator, The Field Museum

“This is an extremely important book. Reid has selected some of the most cherished beliefs about the native peoples of the insular Caribbean and demonstrates that these beliefs are wrong. The book provides a new view of the past, and clears away much of the colonialist baggage associated with the history of the region as it is currently being taught.”—William F. Keegan, Curator of Caribbean Archaeology, Florida Museum of Natural History

Archaeologist Basil Reid chooses 11 conventional beliefs about Caribbean history, subjects them to analysis by means of the most recent archaeological, historical, and ethnographic research, and demonstrates their status as myths. Many of these myths arise from Eurocentric assessments and the assumption that the writing of history must be founded on written records. While exposing myths such as cannibalism and the Carib-Arawak dichotomy, Reid efficiently and clearly sorts out the successions, subsistence economies, forms of social organization, and cultural affiliations of the many Amerindian groups that populated the Caribbean for 7,000 years. In discussing Columbus, he summarizes evidence showing that Columbus did not write the version of the diaries we have today, and that his arrival was not the beginning of Caribbean history. One chapter valuable beyond its Caribbean interest summarizes the research and debates on the dispersion of syphilis and other treponemal diseases, a process not yet fully understood. Reid's conclusion emphasizes the role of archaeology in clarifying Caribbean history and the nature of archaeology as part of anthropology. Highly recommended.--CHOICE