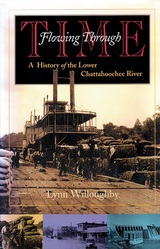 This handsome, illustrated book chronicles the history of the Lower Chattahoochee River and the people who lived along its banks from prehistoric Indian settlement to the present day.

In highly accessible, energetic prose, Lynn Willoughby takes readers down the Lower Chattahoochee River and through the centuries. On this journey, the author begins by examining the first encounters between Native Americans and European explorers and the international contest for control of the region in the 17th and 19th centuries.Throughout the book pays particular attention to the Chattahoochee's crucial role in the economic development of the area. In the early to mid-nineteenth century--the beginning of the age of the steamboat and a period of rapid growth for towns along the river--the river was a major waterway for the cotton trade. The centrality of the river to commerce is exemplified by the Confederacy's efforts to protect it from Federal forces during the Civil War. Once railroads and highways took the place of river travel, the economic importance of the river shifted to the building of dams and power plants. This subsequently led to the expansion of the textile industry. In the last three decades, the river has been the focus of environmental concerns and the subject of "water wars" because of the rapid growth of Atlanta. Written for the armchair historian and the scholar, the book provides the first comprehensive social, economic, and environmental history of this important Alabama-Georgia-Florida river. Historic photographs and maps help bring the river's fascinating story to life.
AUTHOR BIOGRAPHY
Lynn Willoughby is an independent scholar and author of Fair to Middlin': The Antebellum Cotton Trade of the Apalachicola/Chattahoochee River Valley.
TABLE OF CONTENTS