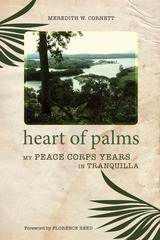 Heart of Palms is a clear-eyed memoir of Peace Corps service in the rural Panamanian village of Tranquilla through the eyes of a young American woman trained as a community forester.

In the storied fifty-year history of the US Peace Corps, Heart of Palms is the first Peace Corps memoir set in Panama, the slender isthmus that connects two continents and two oceans. In her memoir, Meredith Cornett transports readers to the remote village of Tranquilla, where dugout canoes are the mainstay of daily transportation, life and nature are permeated by witchcraft, and a restful night’s sleep may be disturbed by a raiding phalanx of army ants.

Cornett is sent to help counter the rapid deforestation that is destroying the ecosystem and livelihoods of the Panama Canal watershed region. Her first chapters chronicle her arrival and struggles not only with the social issues of language, loneliness, and insecurity, but also with the tragicomic basics of mastering open-fire cookery and intrusions by insects and poisonous snakes. As she grows to understand the region and its people, her keen eye discerns the overwhelming scope of her task. Unable to plant trees faster than they are lost, she writes with moving clarity about her sense of powerlessness.

Combating deforestation leads Cornett into an equally fierce battle against her own feelings of fear and isolation. Her journey to Panama becomes a parallel journey into herself. In this way, Heart of Palms is much more than a record of her Peace Corps service; it is also a moving environmental coming-of-age story and nuanced meditation on one village’s relationship to nature. When she returns home two years later, Cornett brings with her both skills and experience and a remarkable, newfound sense of confidence and mission.

Writing with rueful, self-deprecating humor, Cornett lets us ride along with her on a wave of naïve optimism, a wave that breaks not only on fear and intimidation, but also on tedium and isolation. Heart of Palms offers a bracing alternative to the romantic idealism common to Peace Corps memoirs and will be valued as a welcome addition to writing about the Peace Corps and environmental service.
AUTHOR BIOGRAPHY
Meredith W. Cornett is the director of conservation science for The Nature Conservancy in Minnesota, North Dakota, and South Dakota. She also serves as a senior faculty member in the Conservation Biology Program and an adjunct assistant professor in the Department of Forest Resources at the University of Minnesota. Dr. Cornett has authored or coauthored many scholarly papers. Heart of Palms is her first full length memoir.

Florence Reed is founder and president of Sustainable Harvest International and the 2012 recipient of the National Peace Corps Association’s Sargent Shriver Award for Distinguished Humanitarian Service.
TABLE OF CONTENTS