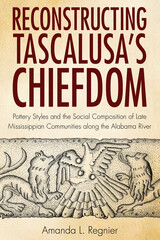 
To explain the cultural and political disruptions caused by Hernando de Soto's exploration deep into north America, Amanda L. Regnier presents an innovative analysis of ceramics and theory of cultural exchange. She argues that culture consists of a series of interconnected models governing proper behavior that are shared across the belief systems of communities and individuals. Historic cognitive models derived from ceramic data via cluster and correspondence analysis can effectively be used to examine these models and explain cultural exchange.
The results of Regnier's work demonstrate that the Alabama River Valley was settled by populations migrating from three different regions during the late fifteenth century. The mixture of ceramic models associated with these traditions at Late Mississippian sites suggests that these newly founded towns, controlled by Tascalusa, comprised ethnically and linguistically diverse populations. Perhaps most significantly, Tascalusa's chiefdom appears to be a precontact example of a coalescent society that emerged after populations migrated from the deteriorating Mississippian chiefdoms into a new region.
A summary of excavations at Late Mississippian sites also includes the first published chronology of the Alabama River from approximately AD 900 to 1600.
AUTHOR BIOGRAPHY
Amanda L. Regnier is a research archaeologist with the Oklahoma Archeological Survey at the University of Oklahoma. Her research interests include archaeology of the Late Mississippian and Protohistoric periods in central Alabama, prehistoric Caddo sites in southeast Oklahoma, and removal-period Indian sites in eastern Oklahoma.
TABLE OF CONTENTS

1. The Problem of Tascalusa’s Chiefdom

3. Archaeology at Late Mississippian Communities in the Alabama River Valley

5. A New Picture of the Tascalusa Chiefdom before and after Contact