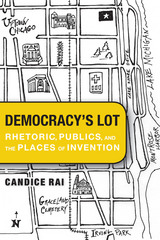 Candice Rai’s Democracy’s Lot is an incisive exploration of the limitations and possibilities of democratic discourse for resolving conflicts in urban communities. Rai roots her study of democratic politics and publics in a range of urban case studies focused on public art, community policing, and urban development. These studies examine the issues that erupted within an ethnically and economically diverse Chicago neighborhood over conflicting visions for a vacant lot called Wilson Yard. Tracing how residents with disparate agendas organized factions and deployed language, symbols, and other rhetorical devices in the struggle over Wilson Yard’s redevelopment and other contested public spaces, Rai demonstrates that rhetoric is not solely a tool of elite communicators, but rather a framework for understanding the agile communication strategies that are improvised in the rough-and-tumble work of democratic life.

Wilson Yard, a lot eight blocks north of Wrigley Field in Chicago’s gentrifying Uptown neighborhood, is a diverse enclave of residents enlivened by recent immigrants from Guatemala, Mexico, Vietnam, Ethiopia, and elsewhere. The neighborhood’s North Broadway Street witnesses a daily multilingual hubbub of people from a wide spectrum of income levels, religions, sexual identifications, and interest groups. When a fire left the lot vacant, this divided community projected on Wilson Yard disparate and conflicting aspirations, the resolution of which not only determined the fate of this particular urban space, but also revealed the lot of democracy itself as a process of complex problem-solving. Rai’s detailed study of one block in an iconic American city brings into vivid focus the remarkable challenges that beset democratic urban populations anywhere on the globe—and how rhetoric supplies a framework to understand and resolve those challenges.

Based on exhaustive field work, Rai uses rhetorical ethnography to study competing publics, citizenship, and rhetoric in action, exploring “rhetorical invention,” the discovery or development by individuals of the resources or methods of engaging with and persuading others. She builds a case for democratic processes and behaviors based not on reflexive idealism but rather on the hard work and practice of democracy, which must address apathy, passion, conflict, and ambivalence.
AUTHOR BIOGRAPHY
Candice Rai is an assistant professor of English at the University of Washington.
TABLE OF CONTENTS
Contents
List of Illustrations
Acknowledgments
Introduction: Democratic Persuasions
1. Places of Invention
2. Democratic Persuasions in Contested Publics
3. Public Art and the Rhetorics of Diversity
4. Positive Loitering and the Ambivalence of Democracy
5. Democratic Affects and Public Formations
Conclusion: From the Thicket
Epilogue: Exiting the Parlor
Notes
Works Cited
Index