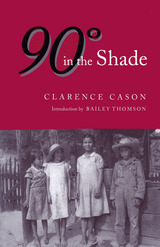 Clarence Cason belonged to that restless generation of southern intellectuals who, between the world wars, questioned the South's stubborn traditionalism, even as they tried to explain and defend its distinctiveness. From his professorial perch at The University of Alabama, Cason wrote polished essays for leading national publications while contributing weekly editorials for newspaper readers. As a journalist in academia, he cultivated a broad audience for his eloquent though tentative observations about the "character" of a region that seemed to be a separate province of the nation.

In 1935, Cason collected his thoughts in a small book of essays titled 90° in the Shade. In it, he declared that climate and the relaxation afforded by field and stream had given southerners excellent reasons for their notoriously slow pace of life. Still, he wrote, "there is much work that ought to be done below the Potomac." Cason captured the pathos of race relations and other persistent problems and declared that the abominable practice of lynching would end when the best people of the South risked their personal and commercial standing to denounce it. Just days before the book's publication, however, Cason shot himself in his campus office. He left no explanation, but apparently he feared angry reaction from fellow citizens to his mild criticisms and gentle suggestions for change.

The University of Alabama Press brought the book back into print in 1983. This new edition of Cason's classic features an introduction by journalist and UA professor H. Bailey Thomson, allowing yet another generation the enjoyment of Cason's perceptive writing, not so much for any remedy he proposed but rather for the open-minded and loving way in which he addressed the region's tragic experience.