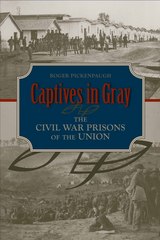 Perhaps no topic is more heated, and the sources more tendentious, than that of Civil War prisons and the treatment of prisoners of war (POWs). Partisans of each side, then and now, have vilified the other for maltreatment of their POWs, while seeking to excuse their own distressing record of prisoner of war camp mismanagement, brutality, and incompetence. It is only recently that historians have turned their attention to this contentious topic in an attempt to sort the wheat of truth from the chaff of partisan rancor.

Roger Pickenpaugh has previously studied a Union prison camp in careful detail (Camp Chase) and now turns his attention to the Union record in its entirety, to investigate variations between camps and overall prison policy and to determine as nearly as possible what actually happened in the admittedly over-crowded, under-supplied, and poorly-administered camps. He also attempts to determine what conditions resulted from conscious government policy or were the product of local officials and situations.

A companion to Pickenpaugh's Captives in Blue.
AUTHOR BIOGRAPHY
Roger Pickenpaugh is the author of a dozen works of history, including Rescue by Rail: Troop Transfer and the Civil War in the West, 1863 and Camp Chase and the Evolution of Union Prison Policy.
TABLE OF CONTENTS
Contents
List of Illustrations
Acknowledgments
1. “Arrangements should be at once made”: Plans and Prisoners, 1861
2. “I fear they will prove an elephant”: The First Wave of Prisoners, 1862
3. “All seem rejoiced at the idea of going”: Prisoner Exchange, 1862–63
4. “In view of the awful vortex”: The Collapse of the Cartel and the Second Wave of Prisoners
5. “The first time I ever desired to be in a penitentiary”: Capture and Transport
6. “Nothing to do & nothing to do it with”: The Constant Battle with Boredom
7. “i had rather bee hear then to bee a marching”: Keepers in Blue
8. “Don’t be so hasty and you may get out”: The Possibility of Escape
9. “Almost starving in a land of plenty”: Rations and Retaliation
10. “Inevitable death awaited its victims”: The Health of the Prisoners
11. “Our honor could in no way be compromised”: The Road to Release
Notes
Bibliography
Index