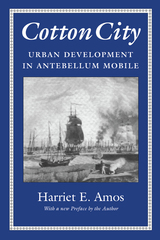 Antebellum Mobile was a cotton port city, and economic dependence upon the North created by the cotton trade controlled the city’s development. Mobile’s export trade placed the city third after New York and New Orleans in total value of exports for the nation by 1860. Because the exports consisted almost entirely of cotton headed for Northern and foreign textile mills, Mobile depended on Northern businessmen for marketing services. Nearly all the city’s imports were from New York: Mobile had the worst export-import imbalance of all antebellum ports.

As the volume of cotton exports increased, so did the city’s population—from1,500 in 1820 to 30,000 in 1860. Amos’s study delineates the basis for Mobile’s growth and the ways in which residents and their government promoted growth and adapted to it. Because some of the New York banking, shipping, and marketing firms maintained local agencies, a significant number of Northern-born businessmen participated widely in civic affairs. This has afforded the author the opportunity to explore the North-South relationship in economic and personal terms, in one important city, during a period of increasing sectional tension.
AUTHOR BIOGRAPHY
Harriet E. Amos is Assistant Professor of History, The University of Alabama in Birmingham.
TABLE OF CONTENTS