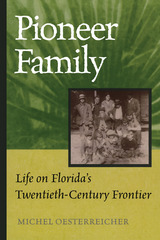 Pioneer Family is based on the recollections of Hugie and Oleta Oesterreicher, who lived in rural northeast Florida in the early decades of the twentieth century. Northeast Florida was frontier country then, and Hugie and Oleta were pioneers. Although the time and setting of their story are particular, the theme of survival during hard times is universal. Born in a cypress cabin on the edge of the great Durbin Swamp located midway between St. Augustine and Jacksonville, Hugie knew every alligator hole, every bog, every creek; he could dry venison so it lasted without refrigeration for months, could build a potato bank that kept potatoes warm all winter, and put down a well without machinery. He knew how to cope with rattlesnakes and moccasins. Early one morning in 1925, Hugie fell in love with a tall, brown-eyed girl as he passed her place on a cattle drive. He courted this girl, Oleta Brown, with no success at first, but finally they were married in 1927.
Their daughter retells their story from vivid accounts they gave of their childhood, courtship, early years of marriage, and struggles during the Great Depression. In an age bereft of heroes, the story of their courage, their faith, and their commitment provides a fascinating empathy with a time that has passed; a place that has disappeared.

"One can not read these stories without thinking of Marjorie Kinnan Rawling's Cross Creek. Indeed, these stories are just as compelling. There are even Faulknerian qualities to some of the characters....The University of Alabama Press has produced yet another excellent book on Florida. Gracefully written, it offers one of the most compelling images of rural life in early 20th-century Florida that exists in print. It should enjoy wide readership." --James M. Denham, Florida Southern College, in The Florida Historical Quarterly

Michel Oesterreicher is a retired teacher.