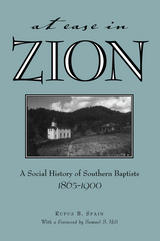 First published in 1967, Rufus Spain’s thorough investigation into Southern Baptist attitudes set the stage for research on religion in the American South. In At Ease in Zion, Spain questions the titular “ease” with society that Southern Baptists seemed to maintain following the Civil War. His analysis of denominational newspapers, as well as reports from the Southern Baptist Convention and state conventions, paint a compelling picture of the subjects’ complacency with their social existence, even as they criticized personal and recreational ethics.

While the South faced significant social, economic, and political changes after the Civil War, religion remained the primary moral influence. As the Southern Baptist denomination made up a significant majority of the population at that time, its leaders and attitudes had a clear and undeniable impact on social norms. Rufus Spain was one of the first writers to actively demonstrate the relationship between Southern religion and Southern society, and his work displays meticulous attention to the ways in which we are affected by complacency. He asserts that Southern Baptists viewed the American South as a version of God’s ideal society; any issues they wished to address were caused by individuals (such as those who did not conform to societal norms) or external attitudes (such as those in differing religions or regions).

At Ease in Zion is a critical part of the scholarly discussion on religion in society. Spain’s research offers a bold analysis of the American South and its citizens during one of the most tumultuous times in its history while providing a basis for arguments on “social Christianity” and its ever-shifting role in the world.