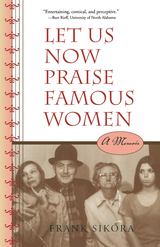 An affectionate, humorous account of small town Alabama during the civil rights era.

When Frank Sikora's six-year-old daughter contracted pneumonia in 1962, his wife Millie vowed that would be the last winter she would spend in Ohio. Despite their misgivings about the racial tensions erupting there, they moved their family of six south, where Frank hoped to fulfill his dream of becoming a newspaper reporter. But when those dreams didn't materialize immediately, mounting bills, repossession, and eviction forced them to move in with Millie's parents, Dan and Minnie Belle Helms, in rural Wellington, Alabama.

With even slimmer prospects for employment in impoverished Calhoun County, the Sikoras came to depend heavily upon the Helmses and extended family members and all their lives became closely intertwined. The Helmses were uneducated, unpolished people, but Sikora's narration of his life with them—often humorous but never condescending—provides a compelling portrait of the attitudes and lifestyle of poor whites in Alabama during the second half of the 20th century, just as James Agee's monumental work, Let Us Now Praise Famous Men, illuminated the Depression years in Hale County, Alabama. Sikora illustrates how resourceful, southern women, in particular, held their families together through trying times.

Interwoven with this commentary on rural white culture in the Deep South is the story of Sikora's developing career as a newsman. Determined to succeed, he finally lands a job with the Gadsden Times reporting the news of black citizens. From that introduction to journalism, Sikora becomes one of Alabama's most acclaimed chroniclers of the civil rights movement, eventually writing some of the acknowledged masterpieces about the subject. Like his landmark book, Selma, Lord, Selma, Sikora's newest work tells the stories of ordinary Alabamians and their perspectives on extraordinary times.

AUTHOR BIOGRAPHY
Frank Sikora is retired from the Birmingham News, a freelance writer for publications such as Time, and author of seven books, including Selma, Lord, Selma (with Sheyann Webb and Rachel West Nelson) and Until Justice Rolls Down: The Birmingham Church Bombing Case.
TABLE OF CONTENTS