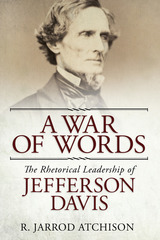 Numerous biographies of Jefferson Davis have been penned; however, until now, there had been no substantive analysis of his public discourse as president of the Confederacy. R. Jarrod Atchison’s A War of Words uses concepts from rhetorical theory and public address to help answer a question that has intrigued scholars from a variety of disciplines since the collapse of the Confederacy: what role, if any, did Davis play in the collapse of Confederate nationalism?

Most discussions of Davis and nationalism focus on the military outcomes of his controversial wartime decisions. A War of Words focuses less on military outcomes and argues instead that, in the context of the Confederacy, Jefferson Davis’s rhetorical leadership should have been responsible for articulating a vision for the nation—including the core tenets of its identity, the values the nation should hold dear, the principles it should never compromise, and the goals it should set for its future. Undoubtedly, Davis possessed the skills necessary to make a persuasive public argument. It is precisely because Davis’s oratory skills were so powerful that there is room to judge how he used them. In short, being a great orator is not synonymous with successful rhetorical leadership.

Atchison posits that Davis’s initial successes constrained his rhetorical options later in the war. A War of Words concludes that, in the end, Davis’s rhetorical leadership was a failure because he was unable to articulate a coherent Confederate identity in light of the sacrifices endured by the populace in order to sustain the war effort.
AUTHOR BIOGRAPHY
R. Jarrod Atchison is an associate professor of communications at Wake Forest University.
TABLE OF CONTENTS

Chapter 1. Decorum in Davis’s Resignation from the Senate

Chapter 4. Conspiracy Rhetoric in Davis’s Response to the Emancipation Proclamation

Chapter 5. Pragmatism and Desperation in Davis’s Push for Conditional Emancipation