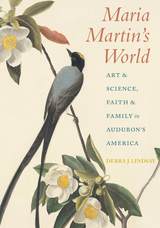 The first book-length treatment of one of John James Audubon’s background painters.

Maria Martin (1796–1863) was an evangelical Lutheran from Charleston, South Carolina, who became an accomplished painter within months of meeting John James Audubon. Martin met Audubon through her brother-in-law, Reverend John Bachman, who befriended Audubon while passing through Charleston on route to Florida where he expected to find new avian species. Martin was an amateur artist, but by the time Audubon left, she had familiarized herself with his style of drawing. Six months after their initial meeting, her background botanicals were deemed good enough to embellish Audubon’s exquisite bird paintings.

Martin’s botanicals and insects appeared in volumes two and four of The Birds of America (1830–1838). She painted snakes for John Edwards Holbrook’s North American Herpetology (1842) and assisted in drafting the descriptive taxonomies prepared by John Bachman—who later became her husband in 1848 following the death of her older sister—for The Viviparous Quadrupeds of North America (1846–1854). Until now, her contributions have been unknown to all but the most astute students of natural history and art history and a close circle of family and friends.

Maria Martin’s World is a heavily illustrated volume examining how Maria Martin learned to paint aesthetically beautiful botanicals with exacting accuracy. Drawing on deep research into archival documents and family-held artifacts, Debra Lindsay brings Maria Martin out from behind the curtain of obscurity and disinformation that has previously shrouded her and places her centrally in her own time and milieu. In the telling of Maria Martin’s story, Lindsay also uncovers many nuances of the behavior and actions of the two prominent men in her life that readers interested in Audubon and Bachman will find noteworthy.

Martin was a gifted artist recognized for having contributed beautiful paintings to a natural history. But beyond the natural world this is a biography of an evangelical Lutheran steeped in the faith of her German ancestors and raised to respect the patriarchal norms of her time. Maria Martin pursued her scientific and artistic interests only when they did not conflict with her religious and familial responsibilities.
AUTHOR BIOGRAPHY
Debra J. Lindsay is a professor of history and chair of the history and politics department at the University of New Brunswick, Saint John, Canada. She is the author of Science in the Subarctic: Trappers, Traders, and the Smithsonian Institution.
TABLE OF CONTENTS
Contents
List of Illustrations
Preface
Acknowledgments
Introduction
1. Family
2. Faith, the Lutheran Way
3. Painting from Nature - Maria Martin and John James Audubon
4. Living Together / Working Together Collaboration and Kinship
5. Family and Science Beyond Botanicals
6. Family and Science Quadrupeds
7. Faith “Our Trust in God”
Abbreviations
Notes
Bibliography
Index