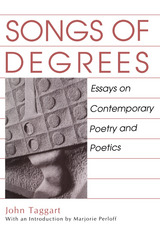 Songs of Degrees brings together 19 related essays on contemporary American poetry and poetics, published as journal articles between 1975 and 1989, by poet and theorist John Taggart. Over the past two decades, Taggart has been a significant intellectual and artistic force for a number of major American poets. By focusing on the work of several major and less well-known American experimental poets from the 1930s to the present, Taggart not only traces the origins and evolution of this experimental tendency in recent poetry, but also develops new theoretical tools for reading and appreciating these innovative and complex works.
The essays are written from the engaged perspective of an active poet for other poets, as well as for those who would like to read and think about poetry in a participatory fashion. The essays thus present “inside narratives” of some of the most challenging contemporary American poetry.
The range of Songs of Degrees extends from the Black Mountain poets Charles Olson and Robert Duncan to such “language poets as Bruce Andres and Susan Howe. Taggart closely examines the work of the objectivist poets George Oppen and Louis Zukofsky. Three essays are devoted to each of these poets, providing detailed readings of individual poems and considerations of each poet’s overall achievement. Taggart also concentrates on poets whose work has not been widely recognized or is only now beginning to be recognized. These include Theodore Enslin, Frank Samperi, and William Bronk. Taggart’s essay “Reading William Bronk” is the first extensive reading of this relatively unknown but truly outstanding poet.
Taggart’s essays also focus on his own poetry. He describes the composition process and the thinking behind it, as well as the poet’s own evolving sense of what the poem can and ought to be. These very personal reflections are unique in their attention to current questions concerning form and the issue of spiritual vision. Avoiding political and cultural reductionism, Taggart throughout keeps his eye—and heart—on the poetic, singing his own “Songs of Degrees,” even as he discovers notes of the same music in the works of other.
AUTHOR BIOGRAPHY
John Taggart is Professor of English and Director of the Interdisciplinary Arts Program, Shippensburg University, Pennsylvania.