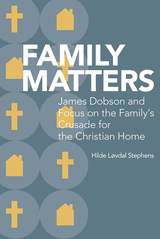 James Dobson—child psychologist, author, radio personality, and founder of the Christian conservative organization Focus on the Family—published his first book, Dare to Discipline, in 1970 and quickly became the go-to family expert for evangelical parents across the United States as American evangelicalism rose as a major political force. The family expert became a leading voice in the Reagan Revolution, and played a role in making American evangelicals even more firmly associated with the Republican Party. Dobson’s principle beliefs are that the family is the center of Christian America and that the traditional family must be defended from perceived threats such as gay rights, feminism, abortion, and the secularization of public schools. Dobson and Focus on the Family dominated Christian media through print, radio, and online venues, and their message reached millions of American evangelical households, shaping the cultural sensibilities and political attitudes of evangelical families throughout the culture wars from the 1980s into the 2000s.

Family Matters: James Dobson and Focus on the Family’s Crusade for the Christian Home by Hilde Løvdal Stephens is an insightful history and analysis of James Dobson’s rise to fame, effect on American evangelical culture, and subsequent descent from relevance. Extensively researched, Løvdal Stephens scoured through Dobson’s books, articles, and other materials published by Focus on the Family in order to explore how evangelicals defined and defended the traditional family as an ideal and as a symbol in an ever-changing world.

By contextualizing the history of Dobson’s reign, Løvdal Stephens’s discerning analysis fills an important gap in our understandings of the politics and culture of late twentieth-century conservative Christianity in the United States. She explores complex topics ranging from Dobson’s celebration of what he believes are timeless biblical values, such as maintaining strict and defined gender roles, to the ways Dobson and Focus on the Family balanced their basic ideals with real everyday lives of average American evangelical families, facing the realities of divorce, working mothers, and other perceived threats to the traditional family.
AUTHOR BIOGRAPHY
Hilde Løvdal Stephens is visiting associate professor of English at the University of Southeastern Norway.

Chapter 4. Family Values and the Problem of Race in America