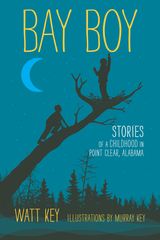 Bay Boy is a collection of essays by award-winning young adult author Watt Key, chronicling his boyhood in Point Clear, Alabama. During his childhood, Point Clear was not the tony enclave of today with  its spas, art galleries, and multimillion dollar waterfront properties.  Rather, it was a sleepy resort community, practically deserted in the winter, with a considerable population of working-class residents.
As Key notes in his introduction, “Life in Point Clear is really about being  outside. . . . I have never found a place so perfectly suited to exercise  a young boy’s imagination.” Key and his brother filled their days  collecting driftwood to make forts, scooting around the bay in a sturdy  Stauter boat, and making art and writing stories when it rained.

In a tone that is simple and direct, punctuated by truly hilarious  moments. Key writes about Gulf Coast traditions including Mardi Gras, shrimping, fishing, dove hunting, jubilees, camping out, and bracing for hurricanes. These stories are full of colorful characters— Nasty Bill Dickson, a curmudgeonly tow-truck driver; I’llNeeda, a middle-aged homeless woman encamped in a shack across the road; and the Ghost of Zundel’s Wharf, “the restless soul of a long-dead construction worker.” The stories are illustrated by charming and evocative artwork by the author’s brother Murray Key.
AUTHOR BIOGRAPHY
Watt Key is an award-winning novelist, screenwriter, and speaker. He is the author of Alabama Moon, Dirt Road Home, Fourmile, Terror at Bottle Creek, Hideout, Deep Water and Among the Swamp People: Life in Alabama’s Mobile-Tensaw River Delta.

Murray Key is a renowned portrait and caricature artist living in Fairhope, Alabama.
TABLE OF CONTENTS

Arts and Crafts in Point Clear

The Longest Day of the Year

A Night at Middle Bay Lighthouse