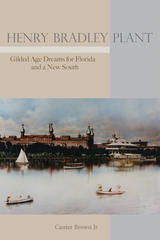 The first biography of Henry Bradley Plant, the entrepreneur and business magnate considered the father of modern Florida

In this landmark biography, Canter Brown Jr. makes evident the extent of Henry Bradley Plant’s influences throughout North, Central, and South America as well as his role in the emergence of integrated transportation and a national tourism system. One of the preeminent historians of Florida, Brown brings this important but understudied figure in American history to the foreground.

Henry Bradley Plant: Gilded Age Dreams for Florida and a New South carefully examines the complicated years of adventure and activity that marked Plant’s existence, from his birth in Connecticut in 1819 to his somewhat mysterious death in New York City in 1899. Brown illuminates Plant’s vision and perspectives for the state of Florida and the country as a whole and traces many of his influences back to events from his childhood and early adulthood. The book also elaborates on Plant’s controversial Civil War relationships and his utilization of wartime earnings in the postwar era to invest in the bankrupt Southern rail lines. With the success of his businesses such as the Southern Express Company and the Tampa Bay Hotel, Plant transformed Florida into a hub for trade and tourism—traits we still recognize in the Florida of today.

This thoroughly researched biography fills important gaps in Florida’s social and economic history and sheds light on a historical figure to an extent never previously undertaken or sufficiently appreciated. Both informative and innovative, Brown’s volume will be a valuable resource for scholars and general readers interested in Southern history, business history, Civil War–era history, and transportation history.
AUTHOR BIOGRAPHY
Canter Brown Jr. has taught in the history and political science departments at Florida A&M University. He is author or coauthor of many books, including Florida’s Black Public Officials, 1867–1924; Fort Meade, 1849–1900; with Walter W. Manley II, The Supreme Court of Florida, 1917–1972; and, with Larry Eugene Rivers, Mary Edwards Bryan: Her Early Life and Works.

Afterword: The Ephemeral Nature of Legacies