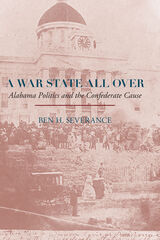 Alabama’s military forces were fierce and dedicated combatants for the Confederate cause.In his study of Alabama during the Civil War, Ben H. Severance argues that Alabama’s electoral and political attitudes were, in their own way, just as unified in their support for the cause of southern independence. To be sure, the civilian populace often expressed unease about the conflict, as did a good many of Alabama’s legislators, but the majority of government officials and military personnel displayed pronounced Confederate loyalty and a consistent willingness to accept a total war approach in pursuit of their new nation’s aims. As Severance puts it, Alabama was a “war state all over.”

In A War State All Over: Alabama Politics and the Confederate Cause, Severance examines the state’s political leadership at multiple levels of governance—congressional, gubernatorial, and legislative—and orients much of his analysis around the state elections of 1863. Coming at the war’s midpoint, these elections provide an invaluable gauge of popular support for Alabama’s role in the Civil War, particularly at a time when the military situation for Confederate forces was looking bleak. The results do not necessarily reflect a society that was unreservedly prowar, but they clearly establish a polity that was committed to an unconditional Confederate victory, in spite of the probable costs.

Severance’s innovative work focuses on the martial character of Alabama’s polity while simultaneously acknowledging the widespread angst of Alabama’s larger culture and society. In doing so, it puts a human face on the election returns by providing detailed character sketches of the principal candidates that illuminate both their outlook on the war and their role in shaping policy.
AUTHOR BIOGRAPHY
Ben H. Severance is professor and chair of history at Auburn University at Montgomery. He is author of Portraits of Conflict: A Photographic History of Alabama in the Civil War and Tennessee’s Radical Army: The State Guard and Its Role in Reconstruction, 1867–1869.

Chapter 3. Of Senators and Legislators

Chapter 4. Alabama’s Soldiery and the Elections