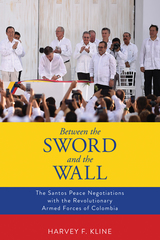 In Between the Sword and the Wall: The Santos Peace Negotiations with the Revolutionary Armed Forces of Colombia, Harvey Kline, a noted expert on contemporary Colombian politics, brings to a close his multivolume chronicle of the incessant violence that has devastated Colombia’s population, politics, and military for decades. This, his newest work on the subject, recounts and analyzes the negotiations between Colombian president Juan Manuel Santos and the Marxist Revolutionary Armed Forces of Colombia (FARC), which ended with a peace agreement in 2016.

The FARC insurgency began in 1964, and every Colombian president after 1980 unsuccessfully tried to negotiate a peace agreement with the group. Kline analyzes how the Santos administration was ultimately able to negotiate peace with the FARC. The agreement failed to receive the approval of the Colombian people in an October 2016 plebiscite, but a renegotiated version was later approved by the congress in the same year. Afterward, more than 7,000 rebels turned over their weapons to the UN mission in Colombia. The former combatants were then to be judged by a special court empowered to punish but not imprison those who had violated human rights. Throughout the book, Kline emphasizes the dual nature of the Santos negotiations, first with the FARC and second with the democratic opposition to the agreement led by former president Álvaro Uribe Vélez.

Kline provides readers with a well-researched analysis based on a variety of resources, including media articles and primary documents from the government, international organizations, and the FARC. He also conducted extensive interviews with twenty-eight government officials and Colombian experts from all ideological persuasions.
AUTHOR BIOGRAPHY
Harvey F. Kline is professor emeritus of political science at the University of Alabama. He is the author of Fighting Monsters in the Abyss: The Second Administration of Colombian President Álvaro Uribe Vélez, 2006–2010; Showing Teeth to the Dragons: State-building by Colombian President Álvaro Uribe Vélez, 2002–2006; Chronicle of a Failure Foretold: The Peace Process of Colombian President Andrés Pastrana; and State Building and Conflict Resolution in Colombia, 1986–1994.
TABLE OF CONTENTS
Contents
List of Illustrations
Preface
Acknowledgments
List of Abbreviations
Introduction
Part One: Historical Background of Colombia before 2010
Chapter One: Political Patterns before 2002: The Context of Government Decision Making before the Administration of President Álvaro Uribe
Chapter Two: Changes in the Balance of Power during the Administration of President Álvaro Uribe
Part Two: The Santos Negotiations
Chapter Three: The Beginning of the Negotiations and the First Three Agreements: August 2010 to March 2014
Chapter Four: Victims and Justice: June 2014 to September 2015
Chapter Five: The Final Negotiations: March to August 2016
Part Three: The Plebiscite and the New Final Agreement
Chapter Six: The Debate about the Peace Agreement and the Plebiscite
Chapter Seven: The Renegotiations and the Second Final Agreement
Part Four: Conclusions
Chapter Eight: The Reasons an Agreement with the FARC Was Reached
Chapter Nine: Tentative Conclusions about the Implementation of the Agreement
Appendix 1. Participants in the Peace Process
Appendix 2. Chronology of the Peace Agreement
Notes
Selected Bibliography
Index