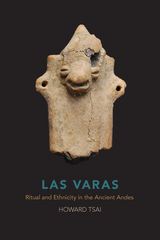 Archaeological data from Las Varas, Peru, that establish the importance of ritual in constructing ethnic boundaries

Recent popular discourse on nationalism and ethnicity assumes that humans by nature prefer “tribalism,” as if people cannot help but divide themselves along lines of social and ethnic difference. Research from anthropology, history, and archaeology, however, shows that individuals actively construct cultural and social ideologies to fabricate the stereotypes, myths, and beliefs that separate “us” from “them.” Archaeologist Howard Tsai and his team uncovered a thousand-year-old village in northern Peru where rituals were performed to recognize and reinforce ethnic identities.

This site—Las Varas—is located near the coast of Peru in a valley leading into the Andes. Excavations revealed a western entrance to Las Varas for those arriving from the coast and an eastern entryway for those coming from the highlands. Rituals were performed at both of these entrances, indicating that the community was open to exchange and interaction, yet at the same time controlled the flow of people and goods through ceremonial protocols. Using these checkpoints and associated rituals, the villagers of Las Varas were able to maintain ethnic differences between themselves and visitors from foreign lands.

Las Varas: Ritual and Ethnicity in the Ancient Andes reveals a rare case of finding ethnicity relying solely on archaeological remains. In this monograph, data from the excavation of Las Varas are analyzed within a theoretical framework based on current understandings of ethnicity. Tsai’s method, approach, and inference demonstrate the potential for archaeologists to discover how ethnic identities were constructed in the past, ultimately making us question the supposed naturalness of tribal divisions in human antiquity.

AUTHOR BIOGRAPHY
Howard Tsai is lecturer at the University of Michigan’s Program in International and Comparative Studies.

TABLE OF CONTENTS
Contents
List of Illustrations
Acknowledgments
Introduction
1. The Staircase and the Tree
2. Ethnic Encounters in the Andean Chaupiyunga
3. Las Varas: A Community in the Jequetepeque Valley
4. The Residences of Las Varas
5. The Ritual Boundaries of Las Varas
6. An Archaeological Investigation of Ethnicity
References Cited
Index