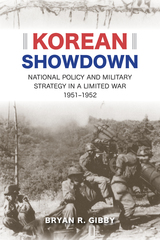 Korean Showdown: National Policy and Military Strategy in a Limited War, 1951–1952 takes a holistic and integrative approach to strategy, operations, and tactics during the Korean War’s stalemate period and demonstrates how these matters shaped each other and influenced, or were influenced by, political and strategic policy decision-making. Bryan R. Gibby offers an analysis of the major political and military decisions affecting how the war was conducted operationally and diplomatically by examining American, Chinese, North Korean, and South Korean operations in the context of fighting a limited war with limited means, but for objectives that were not always limited in scope or ambition. The foundational political decision was Harry Truman’s voluntary repatriation policy, which extended the war by up to eighteen months. Its military counterpart was the American-led Operation Showdown, the last deliberate military offensive to coerce concessions at the negotiation table. Showdown’s failure (and the Communists’ own equally disappointing military efforts) opened up new avenues for solving the war short of a militarily imposed solution.

Gibby’s research draws on primary sources from American, Korean, and Chinese archives and publications. Many of these sources have not yet been mined in diplomatic and military histories of the Korean War. This innovative book also addresses a significant gap in the study of Korean military operations—the linkage between ground and air pressure campaigns, as well as the many Chinese and American operations conducted to establish negotiation positions. Gibby also explores many political and propagandist developments that assumed great importance in the summer of 1952, such as prisoner of war riots, the bombing of hydroelectric dams, and the South Korean constitutional crisis, which significantly influenced American and
Chinese military decision-making.

Ultimately, this volume serves as a cautionary analysis of the limits of force, the necessity to understand an adversary, and the importance of strategic consensus. It also offers an effective case study on an underappreciated period of civil-military tension during the Cold War and on how civilian politicians and military leaders must collaborate to determine a realistic and effective strategy.
AUTHOR BIOGRAPHY
Bryan R. Gibby is associate professor and acting deputy head of the Department of History at the United States Military Academy at West Point. A colonel in the US Army, Gibby is a combat veteran and former battalion commander. He is author of The Will to Win: American Military Advisors in Korea, 1946–1953, which was recognized with the Distinguished Writing Award by the Army Historical Foundation.