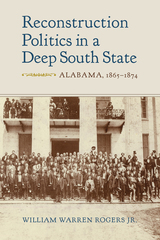 Following the end of the Civil War, white Southerners were forced to concede equal rights to those who had been enslaved, ushering in a new and ruthless brand of politics. Suddenly, the status and place of some four million former slaves dominated the national and regional political dialogue. In Alabama, the Republican Party established itself quickly and powerfully with the participation of a newly freed constituency, firmly aligned against the Democratic Party that had long dictated the governance of the state. Well-heeled planters, merchants, and bankers, joined by yeoman farmers, staged a counterrevolution by gravitating strongly to the Democratic Party and its unabashedly white supremacist measures. The ensuing power struggle in the birthplace of the Confederacy is at the heart of Reconstruction Politics in a Deep South State: Alabama, 1865–1874.

What emerges in William Warren Rogers Jr.’s comprehensive study of the era is a detailed examination of Reconstruction politics, particularly in Alabama. This book explores an explosive and unpredictable political environment that a few years earlier would have been inconceivable. A vivid picture emerges of courthouse rallies and bitter infighting in legislative circles. Rogers’s narrative ventures into darker places as well: to the Tennessee Valley and the Black Belt regions of Alabama, where Klan nightriders used violence against an enemy and ideology they could not abide.

The attempt to capture and account for the unforgiving political landscape created by the extraordinary circumstances of Reconstruction constitutes this study’s most central contribution. Rogers often quotes black and white citizens, Democrats and Republicans. Drawn from newspapers, correspondence, and various federal investigations, these firsthand voices are passionate, unvarnished, and filled with conviction. They offer a startling immediacy and illustrate the temper—or distemper—of the times. Readers are treated to a panoramic unveiling of Reconstruction Alabama politics that provides a sense of what was truly at stake: the values by which a region and the nation as a whole would chart its future for the century to come.
.

William Warren Rogers Jr. is professor of history at the University of North Georgia. He is author of A Scalawag in Georgia: Richard Whiteley and the Politics of Reconstruction, Confederate Home Front: Montgomery during the Civil War, and Black Belt Scalawag: Charles Hays and the Southern Republicans in the Era of Reconstruction.