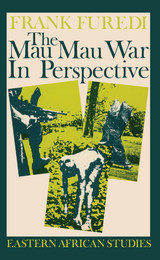 The book breaks new ground in following the story of the participants of the rural movement during the decade after the defeat of the Mau Mau. New archival sources and interviews provide exciting material on the mechanics of the sociology of decolonization and on the containment of rural radicalism in Kenya. For the first time an account of decolonization in Kenya based on primary sources is offered to the reader.

The Mau Mau was militarily crushed in the mid-fifties, but the struggle for land rights was only contained in the post independence era of Kenya. Kikuyu squatters on European estates who formed the backbone of this movement are the main subject of this book.

Furedi’s account considers how the radicalization of rural protest in the so-called White Highlands led to the Mau Mau explosion and how it was sustained during the subsequent fifteen years.

The book establishes a focus for discussion of these critical events through exploring the relationship between rural resistance and decolonization. The author argues that the main issue facing post-colonial policies in Kenya was to resolve the problems raised by the Mau Mau revolt.

Frank Furedi is in the Chair at the Department of Development Studies at the University of Kent at Canterbury.