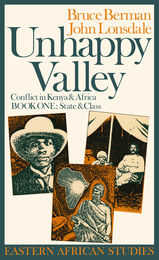 Unhappy Valley, Book One: Conflict in Kenya & Africa
by Bruce Berman
contributions by John Lonsdale
Ohio University Press, 1992
Paper: 978-0-8214-1017-2
This long-awaited book is a considerable revision in the understanding of the history of colonial Kenya and, more widely, colonialism in Africa. There is a substantial amount of new work and this is interlocked with shared areas of concern that the authors have been exploring since 1976.

The authors investigate major themes. These include the conquest origins and subsequent development of the colonial state, the contradictory social forces that articulated African societies to European capitalism, and the creation of new political communities and changing meanings of ethnicity in Africa, in the context of social differentiation and class formation. There is substantial new work on the problems of Mau Mau and of wealth, poverty and civic virtue in Kikuyu political thought.

The authors make a fresh contribution to a deeper historical understanding of the development of contemporary Kenyan society and, in particular, of the British and Kukuyu origins of Mau Mau and the emergency of the 1950s.

They also highlight some of the shortcomings of ideas about development, explore the limitations of narrowly structuralist Marxist theory of the state, and reflect on the role of history in the future of Africa.

Book One on State and Class will be used by students of African history as well as of colonial Kenya; it is also concerned with the theory of history and of political science.
AUTHOR BIOGRAPHY
Bruce Berman is a professor of political studies at Queen's University, Ontario.

John Lonsdale is a Fellow of Trinity College, Cambridge.