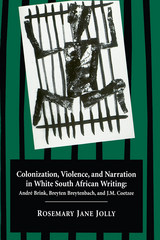 The representation of pain and suffering in narrative form is an ongoing ethical issue in contemporary South African literature. Can violence be represented without sensationalistic effects, or, alternatively, without effects that tend to be conservative because they place the reader in a position of superiority over the victim or the perpetrator?

Jolly also discusses the violence attendant upon the act of narration in the broader context of critiques of Kafka, Freud, Hegel, the postcolonial critics Jan Mohamed and Bhabha, and feminists such as Susan Suleiman.

Rosemary Jane Jolly, Assistant Professor at Queen's University in Kingston, Ontario, lived in southern Africa for twenty years, both in South Africa and Lesotho. Her research is in the area of racial and sexual violence in postcolonial writing.