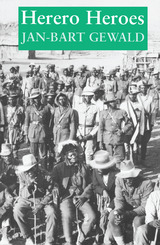 The Herero-German war led to the destruction of Herero society. Yet Herero society reemerged, reorganizing itself around the structures and beliefs of the German colonial army and Rhenish missionary activity.

This book describes the manner in which the Herero of Namibia struggled to maintain control over their own freedom in the face of advancing German colonialism. Taking advantage of the South AFrican invasion in of Namibia in World War One the Herero established themselves in areas of their own choosing. The effective reoccupation of land by the Herero forced the new colonial state, anxious to maintain peace and cut costs, to come to terms with the existence of Herero society.

The study ends in 1923 when the death and funeral of Samuel Maherero — first paramount of the Herero and then resistance leader — was the catalyst that brought the disparate groups of Herero together to establish a single unitary Herero identity.

Jan-Bart Gewald teaches at the Institute for African Studies, University of Cologne.