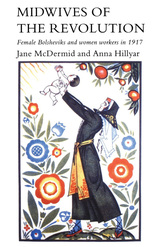 The Bolshevik seizure of power in 1917 and the ensuing communist regime have often been portrayed as a man’s revolution, with women as bystanders or even victims. Midwives of the Revolution examines the powerful contribution made by women to the overthrow of tsarism in 1917 and their importance in the formative years of communism in Russia.

Focusing on the masses as well as the high-ranking intelligentsia, Midwives of the Revolution is the first sustained analysis of female involvement in the revolutionary era of Russian history. The authors investigate the role of Bolshevik women and the various forms their participation took. Drawing on the experiences of representative individuals, the authors discuss the important relationship between Bolshevik women and the workers in the turbulent months of 1917.

The authors demonstrate that women were an integral part of the revolutionary process and challenge assumptions that they served merely to ignite an essentially masculine revolt. By placing women center stage, without exaggerating their roles, this study enriches our understanding of a momentous event in twentieth-century history.

Jane McDermid is a lecturer in history at New College, University of Southampton.

Anna Hillyar is a native Russian, now resident in England.